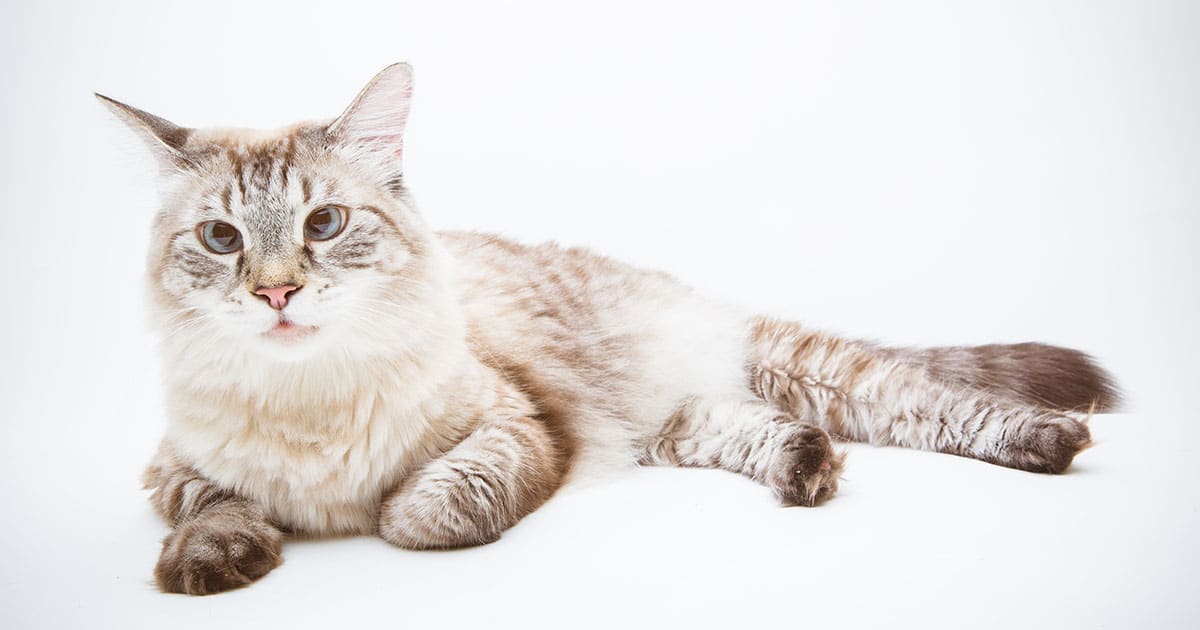 Siamese cats are known for their sharp personalities with quite an aggressive nature. However, coping up with the aggressive nature is not everyone’s cup of tea. In such cases, the Lynx Point Siamese comes to the rescue.

A Lynx Point Siamese is a result of cross-breeding between a traditional Siamese and a tabby cat. In some parts around the world, they’re also known as Tabby Point Siamese. They have the good looks of a Siamese cat with the friendly nature of a tabby point, indeed the best of both worlds.

Well, there is more than the cute looks and amicable behavior. Let’s dig deep and learn some more about these fluffy furballs.

A Brief History About the Lynx Point Siamese Cats

Lynx Point Siamese is quite a new addition to the Siamese breed. They are the result of human-made breeding that first appeared during the late 1940s. Cross-breeding didn’t get much popularity until it became a serious business around the 1960s.

There’s a rumor that Lynx Point Siamese was an outcome of an accidental breeding between a domesticated American Tabby and a purebred Siamese. Well, praise the Lord for such delightful accidents.

The offspring came out with beautiful markings on their body which resembles wild lynx, hence the name. There is a common misconception around people that there is a relation between the Lynx point Siamese and a wild lynx, however, no you know that they’re linked at all.

They’re also known as color print shorthairs. They generally have the color options of a traditional Siamese and the patterns of a tabby cat. Due to their unusual melanin production, these color options tend to darken as they age.

How is the Physical Appearance of a Lynx Point Siamese?

The physical structure of a Lynx Point Siamese is quite similar to a regular Siamese. The only thing that differentiates them is the stripes like the Tabby cats. They usually have a cream or fawn-colored body with markings around the legs, face, and tail tip.

They have a medium body structure and they generally weigh from 7-12 pounds. Like many other cat breeds, the males are usually bigger in size compared to the female. However, don’t go for their slim features, they’re super active and playful.

The Lynx Point Siamese have long legs with small round feet. Their paws are usually mixed colors that have been genetically adapted from the parents.

One of the reasons why the Lynx Point Siamese cat is so popular is its fun-loving and playful personality. They’re super people-oriented and very social as well, hard to believe but it’s true. Along with people, they also get along with other animals. If you have a dog at your home or other breeds of cats then there’s nothing to worry about. These little munchkins will bond with them in no time.

You’ll find them hovering around you all day long and if you had trouble getting some hugs and cuddles from other kitties then behold! You have just got yourself a cuddle buddy. These babies love to cuddle and they’ll never let you feel lonely.

The Lynx Point Siamese cats are very vocal as well. Well, it’s high time you order your cat dictionary because they’re super talkative and chatty. If you run out of meows (pun intended) then we suggest you talk to them in a warm affectionate language. Also, they’re highly intelligent so you’ll have no trouble to potty-train them or even teach a few cool tricks. Make sure you reward the good behaviors with some delicious mouthwatering treats.

What is the Difference between a Lynx Point Siamese and a Regular Siamese?

Technically, there are only two things that make a Lynx Point Siamese cat and a Regular Siamese cat different from each other; coat patterns and personalities.

Lynx Point Siamese cats and Regular Siamese cats don’t have that much of a difference between each other. Both of their body sizes and build are relatively the same. Both of them are athletic. They’re different when it comes to outer appearance and personality.

Lynx Point Siamese cats have dark points and tabby patterned coats. They’re communicative, although their nature is quite laid-back. They aren’t too pushy, which most people perceive of Regular Siamese cats. That doesn’t mean they don’t enjoy their owners’ attention and love.

On the other hand, Regular Siamese cats come with pale-colored bodies. They’re very talkative. They’ll try to get attention through continuous meowing or body language. No matter how much you try to refrain them from doing that or avoiding them, nothing can seem to stop them.

No wonder why most people think of them as an annoyance. Still, that’s no excuse to not adopt them. After all, they are just a bunch of cute furry animals wanting some love and affection. To put it in a nutshell, Lynx Point Siamese cats are introverts, while Regular Siamese cats are more of an extrovert.

What Are the Food Habits of a Lynx Point Siamese?

Also, it’s vital to consider whether to feed the cat wet food or dry foods. Due to the triangular head and jaw shape of these cats, they have a tendency to swallow the dry food whole rather than chewing it. Chewing is important as it helps to keep the cat’s teeth clean as reduces the buildup of plaque and tartar. So, make sure you pick a food that’s easy for the cat to chew and digest.

As protein is the key to retain sound health in a cat, it’s important that you provide it with an ample protein source. Chicken and fish protein sources are the best for these cats. Some manufacturers tend to add beef to add flavor. However, the beef fat is saturated which is not an ideal source of food for the cat.

Fat is another important source and it’s known to provide twice as energy as protein. Along with protein, and other vital minerals, there should be at least 30% of fat in the food. Make sure you provide the foods in a timely manner to avoid obesity in them.

Lynx Point Siamese cats are generally very costly because of their unavailability in the market and their distinctive features.

As we have already confirmed they’re indeed expensive, their price somewhat depends on the breeder and the place you’re going to get them from. A reputable breeder may charge you a whopping $500. This price might seem too much for a cat to pay, but hey, money doesn’t matter so long as you’re getting a well-bred, healthy, fully vaccinated Lynx Point Siamese kitten.

On the other hand, if the price seems too much then you can opt for a lower-priced kitty at the budget of $200-300. Since you’re going to get it at a lower range, there are risks of getting a kitten that might not be healthy.

So, if you’re a cat lover and don’t want to see your kitten suffer for not having a great medical record, we advise you to get one from a breeder who does everything to meet all the medical needs of the kitten and keep it happy and safe. Money should never be a factor to consider when you get to be the two-legged parents of these adorable living beings.

No, the Lynx Point Siamese Cats don’t shed excessively. Instead, they shed at a low rate.

One of the natural traits every cat has is shedding, regardless of what type of breed they’re a member of. That’s very true for Lynx Point Siamese cats. Although they’re a short-haired car, they’ll shed just like a standard Siamese cat tends to shed. You may notice it that much because each of their hair is short in length.

Like other cats, they can have a major shed twice a year. In fact, some of them might start shedding throughout the year to an extent too. This can be of great issue. If you don’t control it as soon as possible, you’ll be vacuuming your house a lot.

Also, this type of cat still has the protein that is responsible for bringing out your allergic reactions in the form of rashes, respiratory troubles, watery eyes, and in some cases hives.

The only way you can stop yourself from facing this type of tedious situation is by grooming the Lynx Point Siamese cat on a daily basis. As a result, you’ll have a grip over its shedding and prevent it from developing fur balls.

Sadly no, Lynx Point Siamese cats are in no way hypoallergenic.

First things first, there no hypoallergenic cat breeds. Hypoallergenic refers to anything that doesn’t trigger any allergic reaction in human beings.

All cat breeds have a protein called Fel D1 in their system. This protein is commonly found present in their saliva, urine, and sweat. It can pass on to your nose through loose hair, therefore causing allergic reactions like rashes, watery eyes, hives, etc. This is why shedding in cats is a thing every cat owner must think of when adopting or getting a cat.

Lynx Point Siamese cats cause allergic reactions less than other cat breeds, as they have short hair and of course, they shed at a slow rate. Also, the rate of Fel D1 secretion in their system is lower. Therefore, the chances of getting an allergic reaction in their presence are pretty much slim to happen.

So, if cat irritants bother you a lot, Lynx Point Siamese cats seem like a good option to adopt. They don’t shed that much. Also, it helps the fact they’re very easy to groom, which further reduces the chances of getting an allergic reaction. However, if your allergies derive from something impossible to control, then looks like you can’t get any cats at your home, let alone Lynx Point Siamese cats.

How long do they live?

Lynx Point Siamese cats are capable of living up to 12 years, usually speaking.

According to the Swedish Insurance Data, Lynx Point Siamese cats have an average life span of 12.5 years. So, it’s pretty much safe to assume that this type of cat can live up to 10 years to 12 years at an average rate.

If you pay close attention to all of its health needs and requirements, it’ll be able to pass the limit of 12.5 years effortlessly. Still, that necessarily doesn’t mean it won’t get sick or get any disease. There are a few ailments that can affect your cat more than other breeds, for example, lung infection, feline osteochondrodysplasia, and vestibular disease.

If by any chance it develops any of these diseases, whether be it serious or trivial, you must see it to a veterinarian. With a veterinarian’s guidance and expertise, you’ll be able to get them back to normal in a short span of time, in fact, make them healthier as they were before.

Lynx Point Siamese cats are a restrained version of the purebred Siamese cats. They’re equally affectionate and curious. They just don’t express it a lot. They’re even a good choice for those with allergies.

As a fellow animal lover, I can vouch for the fact that these fur babies are no less than a drama queen. They’re beautiful, intelligent, and surely a great companion.

As an Amazon Associate, I earn from qualified purchases theidealcat.com is a participant in the Amazon Services LLC Associates Program, an affiliate advertising program designed to provide a means for sites to earn advertising fees by advertising and linking to Amazon.com.