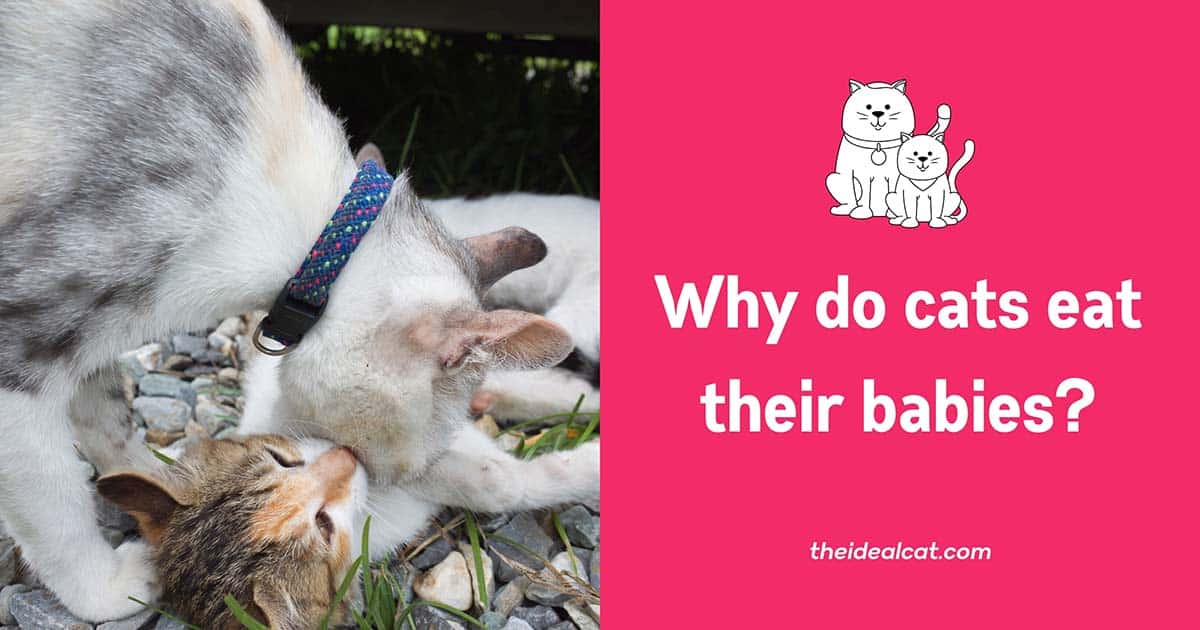 If you’re the owner of a cat who has recently given birth, you might have noticed changes that caused you great concern. Either she became too protective, too uncaring, or she may have eaten some of her young. And this leaves us with a puzzling question: why do cats eat their babies?

In this article, we’ll talk about the reasons why mother cats tend to eat their babies. Hopefully, this will help you understand her unusual behavior, and determine if there are ways to prevent her from doing so.

I understand that you might find this bizarre and grotesque. After all, mothers are naturally protective of their babies – so eating one’s child is considered inhumane and cannibalistic for human beings.

But bear in mind that cats are from another species. What may be bizarre for us may be the only natural for them. This can be a tough pill to swallow. Nevertheless, we will provide you with detailed explanations as to why queens, another name for mother cats, to eat their babies.

One of the main reasons why cats eat their babies is that they were already born lifeless. The mother cat knows that her stillborn kitten wouldn’t have any more use and that its body will start decomposing soon. As a result, the decomposing body will start smelling bad and might even attract diseases for the whole litter.

Because of this, it is only natural for queens to eat their young when they’re stillborn. Not only does this keep her safe area clean, but it also keeps her other kittens safe from potential diseases that the decomposing body might attract.

Another reason why mother cats tend to eat their babies is that they were born with deformities or are already too weak because of sickness.

When kittens are born, we rarely notice which ones are born sick and deformed. But mother cats have the instinct that helps them determine and separate her healthy babies from those who were not so fortunate.

In this case, sick kittens are too weak and may not live long enough, while deformed kittens may not be able to fend for themselves even when they’re old enough. This is why mother cats opt to eat their unhealthy kittens instead.

Additionally, because sick and deformed kittens are naturally weaker than their healthy siblings, they tend to attract predators. Thus, queens would rather eat them than having them eaten by these predators. This is also one way of protecting the remaining healthy litter.

You may find the compassion to be a bizarre reason for a parent to eat her child, but this seems to be true for cats.

Cats in the wild know that when their kittens are old enough, they should be able to fend for themselves and steer clear from danger. But when they’re still young little kittens, they would have to depend on their mother for weeks until they begin to wean.

When mother cats feel that they cannot protect all of their young, they tend to protect only those that they can – even if it meant eating some of them. As previously mentioned, some cats who live in the wild also make sure to protect them from predators. Instead of getting them taken away and eaten by their enemies, they believe eating them is the better option.

Mother cats will always make sure to protect their young. If they don’t feel that they’re living in a safe environment, this may cause them to eat their children. For them, this is a way of protecting them from the harsh surroundings around them.

This is not just true for stray cats and for those who live in the wild. Domesticated cats also show this behavior when they feel that the environment is not safe for their children to grow in.

For example, you may have a dog or children who tend to invade your cat’s safe place. Cats may see this as a threat, although your dogs or children mean no harm.

Another reason why cats eat their young, albeit not very common, is stress. When mother cats are exposed to stressful situations, it tends to affect their behavior. As a result, they end up feeling that eating their babies is the best thing to do, not because they wanted to protect them, but because these stressors have overridden her instinct.

There are different stressors for cats. It may be due to how she gave birth, fear that her children will be taken away, other pets or people in your home, her diet, and other similar factors.

All of these may lead to a change in the mother’s behavior towards her young, and that usually results in her devouring them.

I’ve previously mentioned that the placenta and fetal membrane are potent sources of nutrition, and this is why mothers eat their stillborn or sickly kitten. But even if a mother cat doesn’t have stillborn or sickly babies, there are times when she ends up eating her healthy kitten because she isn’t receiving enough nutrition for herself and the rest of the litter.

Mother cats must receive the right amount of nutrition they need during pregnancy and until the last kitten weans. They instinctively know when they’re not getting enough nutrition, so they will look for ways to make sure that they give her babies the vitamins and minerals that they need. As a last resort, she ends up eating one of her babies.

But since most domesticated cats are properly taken care of, this is a rare case for them – especially if they receive regular check-ups from the vet. However, this may be true for stray cats and for those who live in the wild.

When the queen isn’t healthy or is in pain, she will not behave properly around her young. There can even be instances when she won’t act like their mother at all and consider them as threats. As a result, she ends up pushing them away, hurting them, and sometimes, even eating them.

Some of the conditions that commonly cause the queen to behave like this are feline mastitis, endometritis, metritis, and milk fever. Mother cats usually suffer from these conditions a few days after giving birth, and can cause quite the discomfort for them – and that triggers them to act negatively against their young.

You can’t prevent a mother cat from eating her stillborn, deformed, or sickly child – it’s part of their nature to let that happen. But as to the other reasons previously mentioned, we can come up with ways to make sure that the kittens don’t get eaten.

When it comes to preventing the kitten from being eaten, you have to make sure that the queen does not interact with potential threats. This means giving her and her new family a safe place for her to stay – ideally, one where pets and other people can’t easily get access to her.

As much as everyone in the family wants to welcome the new kittens, their mother may consider them as potential threats who will take her babies away from her. Thus, even with everyone’s good intentions, it’s best to advise them to stay away from the babies for a while.

Ideally, you would want to give your cat a room where she can nurse her babies to good health for a couple of weeks until they wean. Observe if your cat is comfortable around you or not – because if she isn’t, you may also have to limit your visiting times as well. But don’t worry, your cat will warm up to you again once her babies are big enough.

Also, make sure that there are no other pets inside, or have access to, her special room. This is a little sacrifice that everyone in the household – pets included – has to make.

Aside from removing threats, you should also eliminate the stressors that your cat is dealing with. As previously mentioned, several factors can cause stress for your cat. Pay close attention to her and her needs, and address them accordingly.

Some of the signs that your cat is stressed include excessive grooming, failure to urinate inside the litter box, a decrease in appetite, and aggression. Look out for these signs and try to create a more relaxed atmosphere for your furbaby. Otherwise, consult the vet to make sure that she gets properly treated.

Anxiety usually goes hand-in-hand with stress. To make sure that your cat isn’t anxious, there are a variety of natural calming solutions to make her feel better and prevent unnecessary behavior.

We’ve previously mentioned that cats also eat their babies when they’re not getting the proper nutrition – especially stray cats. To prevent this from happening, then you should make sure that your mother cat is well-fed.

Always make sure that you make her eat food that’s balanced and full of nutrients. Experts advise that you must only feed them with-quality wet cat food that’s specially formulated for growth.

The common mistake that new cat owners make is that they only do this step during the time that their cat is pregnant. They go back to feeding them with their regular cat food as soon as she gives birth.

Unfortunately, she still needs the extra nourishment since she’s still sharing these nutrients with her babies when she feeds them with her milk. Thus, don’t be too hasty in going back to regular cat food. Allow the kittens to wean first before switching back to her old diet.

And most importantly, you should always make sure that your cat is always healthy. We’ve previously mentioned that cats suffer from postpartum conditions that may affect how she would behave around her litter. As a result, you should regularly get her checked to make sure that she’s not suffering from any condition.

Should the vet find that she has to be separated from her litter for a while, always ask the vet for advice as to how you should take care of her young. Once they’re reunited after her treatment, always make sure that she is still able to recognize them as her children, otherwise, she might end up pushing them away.

Also, you have to check for signs and symptoms regularly. This will alert you as soon as possible if your mother cat has to be taken to the vet for treatments. This will also make sure that you will be able to separate her from her children as soon as needed to avoid their getting eaten.

While we’re on the topic of bizarre things mother cats do to their young, here are some feline mother behaviors that are also quite normal – even if they seem a little strange.

When a mother cat feels threatened or stressed in her surroundings, she may also end up rejecting or ignoring her kittens. Experts advise limiting the interaction between other pets or people with her litter. Otherwise, she might reject or ignore them and refuse to feed and take care of them.

Mother cats want to make sure that her babies are always safe – even if it means that she has to keep moving them around from time to time. When you see your cat do this, just let her be. This is simply her natural maternal instinct kicking in.

To conclude, while cats eat their babies, there are perfectly logical reasons why they end up doing the same. It’s not that they don’t love their offspring – but it’s dependent on the different factors that surrounded the kitten’s birth.

Scroll back to top