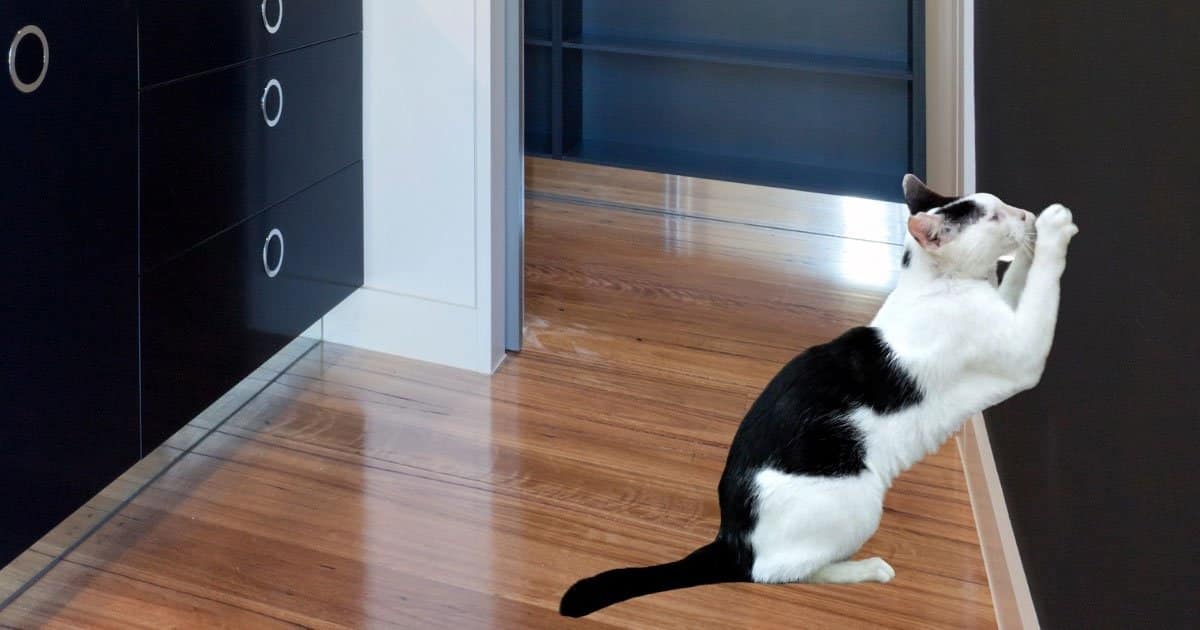 Cats scratching walls or furniture is completely normal and natural, and you shouldn’t worry about the phenomenon itself too much. However, the devastation caused by your cat’s murder mittens is a thing that you can and should prevent.

To hopefully help you minimize damage to your property, we’ll talk about the reasons for a cat scratching below. Then, we’ll give you step-by-step tips for how to stop your cat from scratching inappropriate objects.

Why Does My Cat Scratch The Walls?

To better understand your options when it comes to scratching, you should first know the reasons behind it.

The reasons for scratching walls or furniture could be various, and there is no way for us to give you comprehensive tips. However, as a general rule, here is why your cat may be scratching walls.

1. Removal of the dead outer layer of the claws

The first reason for scratching walls, furniture, or whatnot is the dead layer of sheath on the cats’ claws. To keep their claws short, healthy, and sharp, cats scratch objects to get rid of that outer sheath.

This is the primary reason why scratching is completely normal for cats. You can’t do anything about it by punishing your cat – your cat will instinctively scratch whenever he needs to drop the sheath layer from his claws.

Rather than try to punish your cat or move inappropriate items out of his reach, you should give him other items for scratching. But more about this below.

The second big reason for scratching is marking territory. Cats are very territorial animals, and they mark their dwelling to let other cats know who is the master.

Aside from providing visual marks for potential intruders, cats also leave their scent on the object they are scratching. Cats have sweat glands between their paw pads, so by scratching, they not only physically mark territory but also leave pheromones.

Cats mark their territory no matter whether they live inside or outside. Since they are very territorial, they consider your home their own little kingdom. And it’s precisely because of this territoriality that cats meet other cats or dogs with aggression.

Many cats scratch things when they are happy. This quite often happens when cats get the zoomies, when they run and jump around like crazy. Zoomies are completely fine, if you didn’t know, and they can be accompanied by weird behavior, including scratching.

Cats very often stretch their bodies, flexing their paws and extending their claws. Typically, cats stretch after periods of inactivity – just like when we stretch in the morning. Sometimes, cats also stretch when they see their owners – as a social gesture.

In some cases, scratching may also be a sign of boredom, stress, or neglect. If these are indeed the causes of scratching in your cat, then he will probably be meowing as well.

Although cats are solitary and are very independent creatures, they need attention and care as well. If you are away from home often, leaving your cat alone, then the cat might get depressed, bored, or feel neglected.

Ideally, if you are often off for work for a long time, you should have two cats or a cat and a dog. Cats need companionship and also require plenty of petting, exercise, and communication. Aside from communication, cats also need to be groomed, well-fed, and healthy.

If your cat is somehow dissatisfied with his life, one of the signs might be meowing and excessive scratching. With that said, spoiled cats may scratch even when they receive plenty of attention, food, and care, so you need to be careful.

Cats are known to bury their waste. The primary purpose of burying feces and urine is to avoid unwanted attention from predators.

Big cats – like leopards – often take their food to a tree branch to protect it from predators and store it for a later time. This happens when the cat is unable to consume his prey in one go.

Domestic cats may exhibit this behavior after eating as well by scratching walls. Alternatively, it’s possible that your cat doesn’t like the smell of the food and is trying to bury it.

If your cat is scratching walls or other objects after eating, try different food. If the cat does stop scratching with other food, then he probably didn’t like the scent of the old snack.

It’s also entirely possible that there are mice in your walls, prompting your cat to attempt to get them through the wall. If you indeed have mice, then you should be seeing signs like:

If you’ve got these symptoms, then you have a mice problem that needs to be dealt with to avoid harm to your cat and damage to your property.

How To Stop Cats From Scratching Walls?

Now that we understand why cats may scratch walls, furniture, or other objects, we should hopefully have a better idea of how to stop it. Below is a step-by-step guide on how to reduce the harm from your cat’s scratching desire.

Determine the reason for scratching

Although the primary reason for scratching for cats is to get old layers of their claws off, there is a bunch of other reasons for scratching as well, as listed above.

No matter what, your cat will always scratch to refresh his claws, but there may be some other factors at play. Following the information we gave above, try to find out whether there are any other triggers for scratching.

Before proceeding, find out if all of your cat’s needs are met and whether there are any mice in your walls.

Even if you eliminate other triggers for scratching, your cat will keep scratching items throughout your home. The only way to prevent this is to give your cat something else to scratch. This “something else” could be a scratch post or a piece of cardboard.

Now, cats can be super-picky about the surfaces they scratch. You’ve probably heard that cats often ignore scratch posts that owners bought for them. This is because cats are weirdly selective when choosing things to scratch.

But once you do purchase a scratch post, you’re not quite done. First up, you should place the scratch post as close as possible to the items that your cat currently likes to scratch. And secondly, you need to teach your cat not to scratch walls, furniture, or other unwanted objects.

Teach your cat not to scratch unwanted objects

To start teaching your cat right and wrong objects for scratching, you should cover the inappropriate objects with something that repulses your cat. This might be double-sided sticky tape, sheets of sandpaper, or aluminum foil.

Alternatively, you may attach cotton balls that have a scent that your cat doesn’t like. Scents aren’t the best idea though because they may carry over to the scratching post, forming negative associations with it in your cat.

If your cat tries to sometimes scratch the walls or your furniture, then you should use “remote punishment”. For example, you may use a spray bottle, throw a pillow at your cat, blow a whistle, or make a loud sound with another object at a distance.

Once your cat starts to consistently avoid the unwanted objects and instead prefers the scratching post, you may gradually move the post to a location that’s more suitable for you. Moving the post 3 inches a day is a decent guideline to make sure that you don’t throw your cat off.

Alternatively, if the current location is fine for you, there is no need to relocate the scratching post.

Once your cat has used the scratching post for several weeks or a month, you may start gradually removing the sticky tape or whatever you’ve used to cover the unwanted objects.

If you are wondering if trimming claws helps with scratching, it does to an extent.

Cats keep their claws retracted when they don’t need them to keep them sharp. When the claws are retracted, they won’t be hitting any furniture accidentally.

However, as the claws grow long and get curved, some portion of them may start sticking out. A telltale sign of excessively long claws is when they get caught on furniture or other objects when the cat doesn’t mean it.

In this case, trimming your cat’s claws would allow you to prevent accidental damage to your property. Besides, it might let you reduce damage when your cat does scratch inappropriate objects. However, it won’t address scratching by itself – cats will scratch no matter what you do because they need it to keep their claws healthy.

Anyway, before trimming your cat’s claws, you should get your cat used to you touching his paws. You could give your cat a treat and gently pet his paws and legs while he is occupied.

As time goes on, gradually increase pressure and switch to squeezing so that you can extend the cat’s claws. Cats really don’t like when their legs and paws are touched, so it may take quite a while before your cat gets used to it.

To extend a claw, you need to squeeze the top and bottom of the cat’s paw just behind the claw you want to extend. When the claw is out, you should clearly see the so-called “quick” – a small area with pink coloring. The “quick” is composed of blood vessels running to the claw.

When trimming, you should NOT cut this pink portion because it will cause pain and bleeding. You only need to trim the tip of the claw past the quick.

Once you do trim the claw, it will get short and dull – as your cat scratches on things after trimming, his claws will get sharpened.

In terms of tools, you may use regular nail clippers, but you can also find special trimmers designed for cat claws. The latter are more convenient and have a reduced risk of damaging the claw when trimming it.

Is It OK To Declaw An Indoor Cat?

Finally, we should cover declawing as well.

Declawing is a very bad idea since it’s basically animal abuse – claws are an essential part of a cat’s health and behavior. After declawing, cats may feel discomfort when walking as well. Besides, declawing is illegal in some areas.

If you are so worried about your cat’s claws that you are considering declawing, then you probably shouldn’t have a cat in the first place. It’s completely normal for cats to scratch things, and the only reasonable thing you can do is to teach your cat what he is allowed and not allowed to scratch.

Declawing should only be done if it’s medically necessary for the cat – e.g. when the vet needs to remove cancerous nail bed tumors. In this case, if the affected claw isn’t removed, the cat will most likely die. But declawing shouldn’t be done because you are annoyed by scratching.