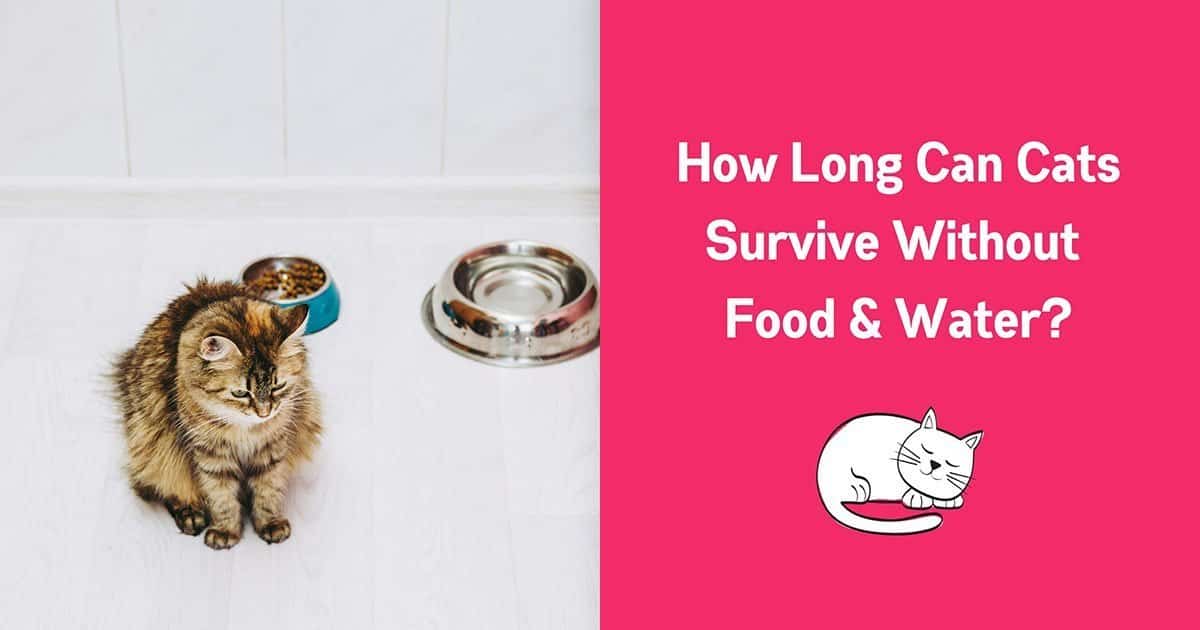 As a fur parent, we know that your cat’s health and wellness is of the utmost importance to you. This is why you may get a little anxious when he starts showing disinterest in the food or water that you give him.

Like human beings, cats also need food and water to survive. Your feline friends get the nutrition they need from the food that they eat. Aside from helping them grow stronger, it also helps boost their immune system to make sure that they’re protected against diseases. Additionally, food also gives them the energy needed to perform their daily activities.

Similarly, they also need water to survive. Water helps break down the nutrients in the food that they eat while also assisting in the functions of their various organs. Without it, your cat can easily suffer from dehydration – something that can lead to even worse conditions.

With that in mind, you should be mindful of the times when your cat refuses to eat his meals. While felines tend to skip meals from time to time, their complete avoidance of food and water for a few days should be a cause for concern.

How Long Can Cats go Without Food

On average, cats can survive up to two weeks without eating any food. However, bear in mind that this is based on the notion that your cat is still getting enough water and other liquids like milk. This period can be a lot shorter if your cat is not drinking anything at all.

The length at which a cat can survive without eating also depends on several other factors. Here are just some of the factors that you should take into consideration.

A domestic cat grew up under the care and pampering of his owners. They’re used to being fed at given times throughout the day and also go to regular vet check-ups. With that said, they are in a better condition than their stray counterparts.

But while their health is closely monitored, this doesn’t mean that they can survive longer when they have nothing to eat.

Contrarily, stray cats are used to fending for themselves to survive. To them, a day without eating is just another ordinary day, and they know very well how to survive even with the lack of food to eat. For this reason, it is believed that stray cats can survive longer without eating food.

Additionally, stray cats are also skilled in looking for their food. Domestic cats are used to being given food daily, so they may not have the skills necessary to help them find food. Thus, even if they wanted to eat, they may not be able to find food that’s sufficient to give them the nourishment they need – and this makes them less likely to survive.

Another factor that you have to look into is the age of the cat. Cats who are at their prime are strong enough to survive a week or more without eating anything, but this may not be the case for newborn kittens or older cats.

Newborn kittens – or even those who are already a few months old – need large amounts of vitamins and minerals to survive. They need this for their proper development, and not getting enough food will lead to malnutrition or the development of harmful conditions.

Also, they’re not strong enough to fend for themselves. Kittens can’t find their own food, so they have to rely on their mother to survive. Without their mother’s milk, they can only live for a few days at most.

We can say the same for older cats. They are no longer strong enough to fight for food, so their age is also a disadvantage.

Additionally, older cats may already have developed health conditions due to their old age. This means that their chance for survival without food is also within just a few days.

In some instances, it was revealed that cats with a healthy amount of stored fat have a higher chance of survival. If cats don’t get enough food but still get enough water, the stored fat in their body gets converted into energy. This is how they are capable of surviving even without intake for days or weeks.

However, this doesn’t mean that obese cats can survive longer. While they have a lot of stored fat, this may not be a healthy amount that can help them get through life without eating. Bear in mind that obesity is also a risk factor, and that may decrease their chances of survival.

Additionally, they could also be at a higher risk of developing fatty liver. When the fat proteins that were converted to energy begin to accumulate in the liver, your cat could develop more serious concern and that could very well reduce their survival time.

Similarly, you should also consider your cat’s state of health. Without a doubt, a perfectly healthy cat can go on without eating food for up to fourteen days. However, those who are suffering from health conditions may not make it that long – even when they’re at their prime.

And finally, you should also consider all the other factors that the cat has to experience when they’re not eating.

Are they in a nurturing environment? Are they given enough attention from their owners? Are they feeling stressed out about everything that’s happening around them?

These are just some of the questions that you have to answer to determine if they can survive a long time without eating food.

How Long Can a Cat Survive Without Water

Water helps cats break down the nutrients so that they may easily be absorbed by the body. It also makes sure that their organs are properly hydrated so that they can perform their important bodily functions. With that said, you can see why drinking water is essential to your cat’s survival.

Given the importance of water for survival, most cats can only last up to four days without drinking.

Bear in mind that a cat’s body is capable of taking the water content of the food they eat to make sure that they are still properly hydrated. Thus, even without drinking, a cat who has been fed with wet cat food has a higher chance of survival than a cat who is only eating dry food without drinking water.

Additionally, they can also get the necessary water content from drinking milk and other similar liquids. Fruits are also a healthy source for water, so this may also lengthen their survival period.

Thus, even when they’re not drinking water, they still have a higher chance of survival if they’re eating food that has high water content.

As previously mentioned, water plays an important role in making sure that a cat’s organs perform their necessary functions.

First, water helps break down the food particles to make sure that it can be easily absorbed by our bodies. As a result, our digestion also improves. In a way, this helps with our body’s toxin removal as well.

And third, water makes sure that the organs are properly hydrated. Without water, your cat’s organs may be forced to shut down, and this can lead to life-threatening conditions that can greatly reduce his chances of survival.

With everything discussed, you can now see that a cat who doesn’t drink anything is less likely to survive than a cat who does not eat but still stays hydrated.

Reasons Why Cats Refuse to Eat

If you’re a pet owner, you are too familiar with how stressful it is when your cat refuses to eat. You should know that there are various reasons why your cat won’t touch his food and knowing the reason why can help you encourage him to start eating again.

When humans feel unwell, they often lose their appetite to eat. The same is true for your cat.

When a cat skips a meal from time to time, it’s not usually a cause for concern. But if your cat refuses to eat for days, you should already take this as a warning sign that something is wrong.

This may be due to a variety of reasons, such as infections, intestinal problems, kidney failure, and can even be something as serious as cancer. And since it’s not something that you can try to solve on your own, we highly suggest taking your cat to the vet as soon as possible.

Other warning signs that you have to take note of is excessive vomiting, diarrhea, fatigue, fever, or a combination of some or all of these symptoms.

Another reason why your cat is not eating is if he finds eating the food too painful.

This is a usual scenario when it comes to older cats, because they may have already developed weaker teeth or gum conditions that make chewing less enjoyable. Nevertheless, younger cats who are also suffering from gum and teeth conditions may also find eating unpleasant.

In this case, we suggest giving them soft food or wet food. This doesn’t require a lot of chewing, so they may find it more bearable. As much as possible, try to avoid feeding them with dry kibble, because this may cause further damage to their teeth and gums.

But most importantly, don’t hesitate to take your cat to the veterinarian if the problem persists for a long time. They may be able to give your cat medicine or the proper treatment to permanently cure their discomfort when eating.

In most cases, this happens when you’ve been feeding your cat the same thing over and over again. Alternatively, this may also be because of a sudden change in his diet, and he finds himself unsure if the food will taste as good as his previous diet.

When this happens, we advise adding wet food to the kibble to give it a more appealing scent and flavor. You can also try to get him used to eat different food so that he doesn’t grow tired of the same cat food over and over again.

And in case of a change in his diet, make sure that you don’t do so abruptly. Try to add a little bit of his new diet into his old one. Once you notice that he’s getting comfortable with his new diet, you can increase its amount and reduce the amount of his old one. Continue doing so until you have fully introduced him to his new diet.

Another contributor to your cat’s loss of appetite is stress.

For a cat, stress can be caused by a variety of reasons. In most cases, it is due to things that are taking place in his surroundings.

A good example is when you go on a trip for a few days and you decide to leave your cat with a friend or family member. If the cat is not familiar with who is taking care of him, this may stress him out for a while and that could cause him to lose his appetite.

Another example would be if you’ve moved to a new home. Cats rely strongly on the scent of its surroundings, and moving into a new place with an unfamiliar scent may be stressful to him.

In both scenarios, you can try to reduce the stress by making your cat feel reassured and secure. If you’re planning to go on a trip without him, you can also leave a shirt or any time that leaves your scent so that he will still feel comfortable.

In most instances, pet owners notice that their cats greatly lose their appetite after getting vaccinated or after drinking their medicine.

In this case, this should not be a big cause for concern since it’s simply just a side effect of the medication in his system. As soon as the side effects wear off, your cat will be able to eat happily again. But in most instances, cats still eat even after getting vaccinated – but only in more limited quantities.